Concrete construction, designer’s despair:
over-tended landscape, sharp and severe,
too much exactness, preempted repair;
nothing left to chance, exhausted idea.
Made to resemble somewhere else but here:
rectangled, circled, and ratio-ed square,
hint of something made transparently clear,
a misguided homage belongs elsewhere:
‘belongs’ – a possessive that’s made to adhere…
‘constrained’ – a caught-yard of rarified air…
‘suffocated’ – short of depth, too austere…
‘made to measure’ – overly shaped with care…
. The golden rule, best considered a guide;
. a general frame that’s loosely applied.

To the reader: Great garden designs have an inner quality, a core-strength, an integral thread of inspiration that leaves no doubt about intention. Design has to be a deliberate response to a problem; but more importantly, an authentic and appropriate remedy. The application of a fixed design solution (as in the golden ratio) provides some scaffolded security but overly applied strips away the virtue of design’s natural curiosity; design is an applied art – then a science of sorts.

To the poet: A poet can fail his own test. As a sonnet written about the over-applied rule, this one goes near to proving the point. A truly responsive design will be so responsive to its context that a distinction of cause and effect will be hard to determine. The environmental need and its fix become one-and-the-same. Nature is the best of all ‘fixers’ it’s also the best of all ‘mimics’ – naturally! 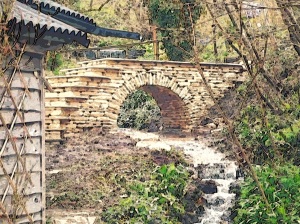