There’ll be ample time to talk of wonders;
but for now, you have the gift of eyes and ears.
Silence speaks as loud as lightning thunders.
Save those unspoken thoughts for coming years.
As for now, take note: watch the world unfold,
watch the patterns change and the colours dance;
watch the hand shake, the foot step, the toe hold.
Recognise yourself in a friendly glance.
As for now, listen: hear the change of tone;
hear the rhythm, the pitch, the count of three;
hear the heart beat, the ear drum, the jaw bone.
Make yourself ready for the change of key.
. Two eyes, two ears, but just one mouth for each.
. There’s much to be said for the gift of …

To the reader: It’s not that babies can’t vocalise; it’s more the point, they can’t speak. And all for good reason. The receptive senses of hearing, seeing, touching, tasting and smelling need time to grasp the rituals of living. In this sensory world, babies communicate reactively; using spontaneous gestures that display their simple understandings of the comfort continuum. Our physical glossary precedes our emotional vocabulary.

To the poet: Our first language belongs to the body. And I suppose through body-language we can express the sentiments of any poetic theme or form. Words are just subsequent translations of abstracted notions the brain has previously rehearsed; remnants of an internal theatre. Before speech performs its reductive act, let the first scene be one of mental gymnastics … creatively dance within …hold that thought.

Yesterday, I watched a boy crawling
commando-style across a carpet-rug.
Giggling and chortling, rising and falling,
pushing and pulling with a hauling tug.
In jungle-greens he scampered, head down low.
He moved in spits and spurts. He paused a while.
He reset direction, then off he’d go.
With syncopated skim and cherub’s smile;
through a forest of legs, he spied a light:
a destination worthy of pursuit.
But, when almost there, with his goal in sight,
down came the arms of love: “Aren’t you cute!”
. His mission is to walk, stand proud and tall;
. give the boy some freedom, some space to crawl.

To the reader: The school-day is all but done. Here comes a troop of toddlers and their yet-to-walk entourage in pushers and prams. They are the freedom fighters, come to release their brothers and sisters from the tyranny of school. One in particular catches my eye; he’s a rug-rat, escaped surveillance and making good ground … but like so many before him, his noble pursuit is thwarted; he is lifted to higher ground by the doting arms of mum… another man down, or up as the case may be.

To the poet: A photograph might have captured the scene more faithfully; but not the story. The story is in the poem which is a figment of my imagination. No-one else, on the day, had any idea of my interpretation. In a fleeting moment I captured a metaphor… two thoughts combined; and so began my sonnet. Metaphors, like butterflies, are at their best in flight; pressed to the page they may lose their colour.

By the end of childhood I learned to draw
fine lines (with keen eyes and measured skill).
I learned to draw what mattered; to ignore
the distractions (there were no marks for frill).
How to overcome the errors of sight?
How to foreshorten an odd perspective?
These were the problems you had to get right:
minimal tolerance for technical give.
All things became parallel, rightly squared;
they had to marry-well to plot or grid;
they had to tally-well or be repaired;
they had to mirror what the real world did.
. After childhood there are no wonky lines;
. they neatly straighten and become designs.

To the reader: At school I enjoyed technical drawing classes, they appealed to my style of measured sketch; where objects take shape according to long-held principles of linear geometry. Tools of the trade were important and taking care of them was critical to achieving a clean result. Of all the lessons I learned at school it was through technical drawing I best understood myself. I freely gave away my naive interpretation of the visual world and adopted rules that enabled me to draw what I see.

To the poet: Between naivety and mastery lies frustration. It’s unfortunate that we abandon our fresh expression of life through naive art… but understandable. Expression, in all its forms, is a social tool that evolves to meet expanding needs. The licence to communicate has rules that can be stretched and personalised but ultimately an audience will accept or reject the value of art. Selecting an appreciative audience is one solution… avoid criticism; create your own applause. 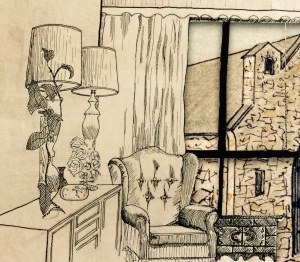